More pregnancy advice you may not need or want…

Upon announcing pregnancy, every woman opens herself up to advice, whether it is her first pregnancy or her third…I am guessing even when you have been pregnant more than 3 times, but wouldn’t personally know.

I thought today I would add my 2 cents worth to that pile of advice:

Drink your fluids the best you can.  This is not my strong suit, but I do try.  With my first pregnancy I was very dilgent with giving up caffeine.  I tried so hard.  I also worried about the dye in my food…then morning sickness hit and it didn’t matter what went in, it all came out, so it became just survival mode.  Once morning sickness improved at 14 weeks I got better about my fluids and eliminating some foods, but not perfect.  I decided I had to pick my battles.  I had to pick what things I was going to obsess over and what things I would just do my best.  I realized there were restrictions I needed to follow, so those, I would really stay attuned to. Beyond that, I could make some good choices, but I had to be able to live with that…  Some of what I worked on was limiting caffeine, over the counter medications and artificial sweeteners.  I would say with my second pregnancy I did not worry at all about caffeine, I was trying to keep up with a infant/toddler and be pregnant, I chose to have caffeine for that.  With this pregnancy, I am limiting my caffeine a little more, but not entirely by any stretch.  I know that will come naturally as the baby gets bigger and its movements get stronger; caffeine makes my babies kick even more, so to spare my internal organs some beating, I cut out more stuff that makes the tenant antsy.  It is a natural choice and honestly feels less like being deprived!

Be flexible in your decisions.  I decided while pregnant with Caitlyn I wanted an unmedicated birth in a birthing center.  Due to complications at the end, I was unable to be in the birthing center and did end up with an epidural.  Now with Sue, all went as planned and it is a good thing I didn’t want meds, she was born 2 hours after getting to the birthing center, there was no time for drugs (and it really was as awesome and empowering as the natural birthing books I had read said it would be!)

But probably even more important than the birthing portion, be flexible with things after the baby is born.  I didn’t think I would ever be a co-sleeper, but I was part-time.  The girls were in their cradle probably about 40% of the time, the rest of the time, it was just so much easier to have them next to me for those night-time nursings.  With Caitlyn, I had decided I wanted to do cloth diapers.  We lasted about 2 months–and then became Pampers parents.  I still wonder about that and keep kicking around the idea to try again, but hubby is not real interested…we’ll see, but I think Pampers will continue to get our investment at least part time!  I also swore we wouldn’t use binkies.  Yeah, I was wrong.  Caitlyn used hers for 10 months and Sue still hoards them.  They saved my sanity and in my experience, did not harm the nursing relationship in any way whatsoever.  (Sue still nurses too and we are closing in on 27 months old) 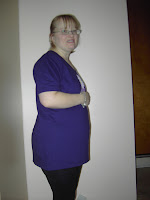 All of the above is nice, but honestly I think the thing that matters the most to me, is treasure the time you are pregnant as much as you can.  This is the closest you will be to your child.  You alone feel all the kicks, all the movement.  You can sometimes invite the daddy to feel from the outside, but it is not the same.  You get this close bond.  And for the time being it is yours alone.  From the minute he or she is born, you have to share them.  The daddy expects to hold them, the midwife needs to check them, the nurses need them…and it just continues.  It is your job from the minute they are  born to help them grow into their own person.  And ultimately to strike out on their own.  The thought of them leaving me used to terrify me, now I have come to a place where I want them to grow up and be on their own (not yet of course, and they don’t have to hurry) some day.  And I will relish the job of teaching them so many things, but while I carry each one, that is my time to hold them the closest and that I treasure, and I hope all the pregnant mommies out there can too.

What advice have you gotten with your pregnancies?  What was the best advice you got?  What were some of the ridiculous things?  What was that thing you thought, “if I hear this one more time, I am going to scream!”

Survive til you Thrive!
This entry was posted in kidlets, pregnancy. Bookmark the permalink.