I missed the blog hop yesterday hosted by Mama M but I liked the idea, so thought I would share mine today.  (You can head over to her blog to read lots of them where other mama’s shared and linked up.)

Let’s start by saying, I have 87 days until my due date with baby 3.  Thanks, just had to get that out there…

My two stories diverge and merge at various points.

During my first pregnancy, I didn’t know where to even start.  I had never gone to an OB/GYN, just a family doctor, so what to do.  I started by going to my family doctor to confirm there was in fact a new family member coming and then said, what do I do now?  She gave me the name of an OB.  The ladies in the office kept saying how wonderful he was.  No one ever mentioned he had a partner that was, well, nasty and rotten, and probably should be employed in a job that DOES NOT involve people.  Anyway…

I went to my first few appointments.  Sometimes I saw him and he seemed nice enough.  As I began to research labor and deliivery and realized I wanted to go as unmedical as possible, he seemed supportive.  She, on the other hand was not.  I asked once, “what can I do to avoid a C-section?”  “Don’t gain too much weight.”  Helpful, thanks.  Really thought about that answer, huh?

Then early on I started to swell, a lot.  Not the some that I see other women swell, I mean A LOT!  Each time I asked, they just said, well some women swell more.  Okay, people, I am telling you this was not normal…nope.

It turned out I needed to travel to France for work during my 2nd trimester.  I checked with them right away.  They said it was fine, checked with them again, still fine.  Then had the OB (insert witchy woman) write me a letter for the airlines.  I watched her write it on her script pad.

It was time for me to travel.  I swelled more.  I could not even wear my tennis shoes.  I was getting pretty freaked out.  I had hubby call the OB.  They said, “she’s in France?  We didn’t know she was going there.”

Yeah, thanks.  I had been thinking about changing to a midwife before that happened.  At that moment I decided to make the switch even if I was 30+ weeks along.  There had to be better care out there.

So as soon as I got home I contacted a midwife I found on-line.  She worked at a local hospital that also had a birthing center.  Things I had dreamed of for my delivery, but seemed impossible, were standard practice for them.  We made the switch.  Best decision we ever made.

All the sudden at 36-37 weeks that swelling every one ignored, became a big issue.  I developed reflex issues, and started spilling protein and my blood pressure went crazy.  At 38 weeks I was put on bedrest.  I went in at 38 weeks 6 days just for a test, and asked them to check my blood pressure since I was there.  All the sudden all heck broke loose.  I went from, can you check my blood pressure to the OB coming in and saying, “we need to get this baby born today.  You need to go to the hospital.”  This was the only appointment hubby did not come to because it wasn’t really an appointment.  I called him hysterical from the parking lot.  “They say I have to be induced. I have to have the baby right now.”  He came and got me.  We came home, cleaned up the house, went to lunch (brilliant) and headed there.

Everything was so different than what I expected.  All the sudden they wanted IVs, monitors, drugs, all the interventions we did not want.  I saw my birthing center birth slipping away.

At 9 pm they started the induction.  Contractions started about 3 hours later.  About 2 hours after that I woke up hubby as I needed help coping through the contractions.  I still wanted to go without an epidural if I could.  I made it 12 hours without meds.  Then I decided to try the Sta-dol as that was a med they even had in the birthing center.  The 45 minutes of relief I got was so nice, I asked hubby if maybe after that wore off I could try an epidural.  He said, “of course you can, why not?”  I said, “but we had planned to go with no meds.”

Thankfully that Labor and Delivery was known for their “walking epidural” which means you get some relief but still have feeling and know what is going on.

My blood pressure kept going up, even with the magnesium sulfate, but the midwives, who were with me even in labor and delivery, let me keep going since I was still, just barely, in the safe zone.  Apparently I become very inter-focussed when I am in labor.  I did not notice looks or comments between people, I didn’t really care what was going on while I dealt with contractions.

I kept going.  Even when one midwife went off duty telling me I was 9 cm, and the next came in and said I was 6 or 7.  My mom was mad as she said it looked like all the fight went out of me, but honestly, I don’t remember it changing anything.  I argued with the midwife and went back to work.  It seemed to me those 3 cm went by really fast the second time around.

Then all the sudden, it seemed like the contractions changed, like in order to survive them, I needed to push.  But I knew if you pushed too soon it could cause problems.  It just happened at that moment there were no midwives or nurses around.  I tried to tell hubby and my mom to get the midwife because things seemed different, but they didn’t seem to understand.  They just told me I was doing a good job.  So I explained again.  “You need to get the midwife now.  I am telling you, things are different,” so off went hubby.  Turns out it was time to push!!!

So, as discussed beforehand, everyone left, expect hubby, the nurse and midwife…and me of course.

I must say, I hated directed pushing.  There were times I really wanted to push and the midwife would say no, not yet.  But I knew I needed to push.  I thought at one point, they moved me to another bed and I went through a tunnel.  Ummm, later, everyone told me no, no one moved you.  Like I said, I go into my own world when I am having a baby.

I remember asking the nurse once if the baby was almost here.  She said, “well Jessica (the midwife) just went to get her garb on, and that means it is almost time.”  Those were great words.

They offered me a mirror to see my baby being born.  Heck no.

Hubby said he had no idea where I got the strength to continue, but I just kept diggind down inside and giving it a bit more.  I knew I just wanted to find out if my baby was a girl or a boy, and wanted to be done and wanted to have done it without a c-section.

“Can we use the name we planned,” I asked.

And that is how we finally got Caitlyn here, 25 1/2 hours of labor, but she was here.

And as my precious girl lay on my chest, I said, “we love you and we pray you come to know Jesus as your Savior very young, that’s all that matters.”

This post has ended up being very long, so I think we should save Sue for another day.  My two girls, my wonderful hubby and this baby to come, mean the world to me.  I pray they always, always know that. 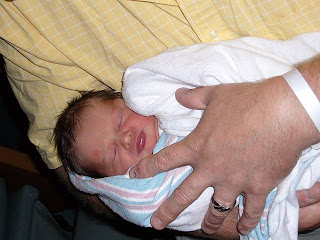 Our beautiful girl.
Survive til you Thrive!
This entry was posted in kidlets, midwife, pregnancy. Bookmark the permalink.