After Patrice was born I was filled with this nervous energy.  I could not stop moving without being overwhelmed by my feelings.  Some good, some bad.

The strongest feeling was to just stay busy.  Keep moving.  At all costs.

This was not all bad.  What better way to keep up with three kids than with a constant need to move?  To do.

It has reached a fevered pitch several times.  Medications helped for a while.  Then they stopped.  Some other treatments were supposed to help and they did, some.  The drawback, as the anxiety eased, more depression shown through.

Now both elements are pretty controlled.  Most days are good.  And thankfully, I have learned a few tricks that make the anxious moments livable.

One is dressing Patrice.  Well, not the actual dressing.  Anybody who has been around babies knows dressing them once they get mobile is anything but relaxing.  No, it is thinking about what I am going to dress her in that matters.  When I get anxious, I picture her.  Picture what I dressed her in that morning.  I close my eyes and look at every bit of it.  I breathe in and out each piece of her outfit until I am calm.  I used to take her to daycare in her pjs.  Now I very consciously dress her every morning.  And it has worked wonders.

Today had a little twist in it.

I made a bad choice.  I saw a horrible news headline.  I should have turned away,  but I clicked on it.  And read it.  Felt my emotions go out of wack.  Then a group of co-workers started talking about how bad the economy was.  That really pushed my buttons.  Then I started thinking about Caitlyn starting school in two weeks.  And that was all she wrote.

The anxiety I work so hard at keeping at bay came crashing through.  Suddenly it was hard to breathe.  My heart was racing.  My mind was going too fast to control it.  I felt physical pain.  I almost gave into it.  But I resisted the urge.

Instead of losing myself in the feeling, I grabbed my pump and headed to my quiet space.  I sent out a call for help on twitter to the #PPDCHAT mamas.  And I began visualizing Patrice.  At first I could not remember what I had dressed her in.  My anxiety level went even higher.  But then it came to mind.  And I began to breathe it in and out.  Every stripe on the pants.  Every ruffle on the onesie.

I must admit it was not the quick fix it often is.  I added in prayer.  Turned my attention away from how fast my thoughts were moving.  Focussed on the sound of my pump.  Looked at all the pictures on my phone.  Chose to believe the tweets on my phone telling me I was handling it well.  Ignored the reminder in my head how the meeting I had to go to was the same one that had been my tipping point the second time I ended up off work due to the postpartum issues.  Pushed that thought as far away as possible.

And I made it through the meeting.  I made it to the next pumping break.  I was calmer.  But still antsy.  I put my head down on the hard table I pump at.  I fell completely asleep for a few minutes.  I woke up calm.

Tonight has had a few hiccups in it.  I don’t know why today is so full of anxious thoughts.  But I am taking them one at a time.  And Anxiety is not kicking my butt… 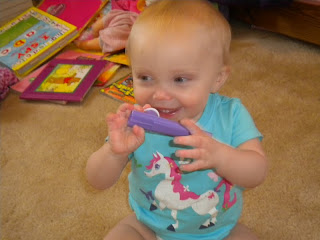 Survive til you Thrive!
This entry was posted in depression, Patrice, Postpartum Depression. Bookmark the permalink.

3 Responses to Anxiety Tried to Kick My Butt Today