Insomnia, oh no, not quite

Over the years I have had bouts of insomnia for many reasons…when the Multiple Sclerosis was at it’s worst I was in the hospital 15 times in three years for steroid IVs.  That will cause major insomnia.  Then I found a doctor that would do the IVs outpatient, so it was two more years of them going to the clinic, much better than the hospital, but still causes insomnia.  Then there are random bouts everyone gets.  And my favorites, seriously, are the ones caused by pregnancy.  Insomnia is actually my first clue I might be preggo.  This time around my husband even noticed and when I told him our family was growing, he said “what made you test, the insomnia?”  It is worst during first and third trimester, but that’s okay.  It is totally worth it.

But today I have been up since 4.  Insomnia, nope.  My girls are sick again.  This time with horrible colds.  And I woke up to Sue coughing.  And the poor thing is so confused.  Think about it.  The gagging of throwing up can be an awful lot like a cough and she just stopped that about a week ago.  So now, when she coughs from her cold, she cries for her “bowl” that she lived with while battling her stomach virus.  It is sad, and cute.

But being up with her, while miserable, is still nicer than the insomnia from the MS treatments.  That was horrible.  I would be sooo tired and then all the sudden I was awake.  The steroids would have me all revved up.  And your mind, after a few days of steroids, is not quite “normal”.  I found with those meds, I obsessed more.  Something would start to bug me that unmedicated I could brush off, but with 3 days of 1000 mgs per day steroids, and that little thing became huge.  It would make me so angry.  Or sad.  Or sometimes, when I was lucky, maybe something would strike me as funny and I could not stop giggling about it.  (That did not happen often!)

And yet, I would do all those steroids again.  It was better than the options when I first got sick.  I was originally tentatively diagnosed at age 15, though it was 4 years more before someone would say it officially (ask any MSer, that is normal and frustrating).  But in the beginning, it didn’t really matter if they officially diagnosed me or not, because there was really nothing they could do.  I remember that first neurologist, looking at me, and saying, “there is nothing I can do for you. I hate teenage MS because I can’t do anything.”  Gee thanks lady.

She kept her promise, she didn’t do much.

It was a little better when I went away to college, a few years had passed and new meds were coming out.  The first preventive medication was Betaseron interferon 1b. It was, and still is, an injection you did yourself every other day.  It’s goal was not to treat the symptoms but to decrease chances of flares, which are times the MS gets worse and there is more potential for permanent damage.

It did decrease my flairs some, but not to nothing.  But it was something, it was something I could proactively do. I could give myself the flu every other night.  Okay, not really, but that is what the side effects felt like for about the first month.

And I continued on Betaseron for almost 5 years.  And it helped to varying degrees.

Now, when someone is diagnosed, there are not only medications, there are several, 5 main ones for prevention of flares and, hopefully, disability.

I am thrilled to not currently need any treatment.  Pregnancy is often a great treatment for MS, 90+% of women go into a remission while pregnant.  Nursing the baby often prolongs that in women.  (I think I will nurse my last baby for 20 years or so, that will work, right?)

And many of the above options were helped along by the National MS Society, either because of awareness they raised, funding they provided or support they give/gave to patients walking the MS road.  And for that I am very grateful, so as I have said, I give at least an annual nod to the MS by participating in the MS walk in May.  This year it is May 2nd.  I am thrilled beyond words to be walking it with my beautiful family.  The family I thought I would never have because of the MS.  We will walk to let the MS know it can not keep us from moving forward.

If you would like to be involved by supporting me financially in the walk, please see my link at the bottom of my blog. It will take you to my personal page.  I would greatly appreciate it, as would the other 16,000 people living in my state alone who have MS.  We need you to help us keep walking. 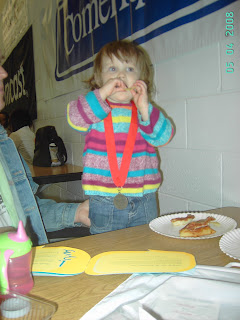 Here is a picture of Caitlyn from the walk 2 years ago.
Survive til you Thrive!
This entry was posted in Multiple Sclerosis, nursing, pregnancy. Bookmark the permalink.

One Response to Insomnia, oh no, not quite